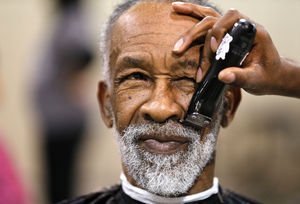 As groups of people bustled around him, ushering patients into dental chairs, Willie Mixon sat quietly filling out a form.

The 56-year-old had come to the Project Homeless Connect event Tuesday at the Greater Richmond Convention Center downtown because he was told that was the best way to meet with a Virginia Supportive Housing representative to jump-start his housing application.

He has been homeless for the past three or four months, he said, shortly after coming back to Richmond from South Carolina. He was homeless there, too, but he returned to Richmond because he grew up here.

He has made progress toward finding a permanent residence. On Tuesday, he provided Virginia Supportive Housing with the appropriate information and now just needs someone to verify his situation.

“It gives you hope,” he said as he waited to visit one of the event’s volunteering dentists to have a tooth extracted that has been bothering him for six months.

Project Homeless Connect is hosted by Homeward, a Richmond-based planning organization that coordinates services for homeless individuals and others in need of help.

The available services at Tuesday’s event ranged from housing and dental care to employment and haircuts. The event has been going on for the past 10 years, and this year 800 volunteers were on hand to help those in need find the appropriate help.

“Today is the day where Homeward as a coordinator pulls together all of these 40-plus service providers and has this event for the community.”

Students at Virginia Commonwealth University’s School of Dentistry and volunteers with the Virginia Dental Association’s Mission of Mercy project offered tooth cleanings and extractions to more than 70 people.

Those seeking dental services through Mission of Mercy events are typically underinsured or uninsured, according to Dr. Juan Rojas, a dentist on the foundation’s board of directors who volunteered at Tuesday’s event.

While Project Homeless Connect was geared toward the homeless, not everyone receiving services Tuesday was homeless. Church Hill resident Joe Pearson has been receiving dental care at the annual event for the past three years.

He gets by through odd jobs, so he has no insurance, he said, and is hoping to get disability benefits because he has no cartilage in one of his knees.

But others — such as Larry Flythe Sr., a veteran who served as a military policeman and then a paratrooper from 1968 to 1977 — were there in hopes of putting an end to their homelessness.

While getting a free haircut, Flythe explained that he has been homeless for the past five months, and this was not the 67-year-old’s first experience with homelessness. He was formerly homeless for more than 10 years in Richmond.

“I’m a soldier and a survivor,” he said.

He did have a residence for two years in between those periods of homelessness, but he said his landlord raised his subsidized rent without informing him, then asked for more money than Flythe could afford on his Social Security income.

“Subsequently, I was out,” he said. “So now I’m trying to get this corrected — not trying, I’m in the process of getting this corrected.”

He attended the Project Homeless Connect event because he thought it was an opportunity to find a permanent home.

“Who knows at what moment the right person, the right timing will avail itself to your circumstances,” he said.

Because he is a veteran, he does not have to worry about health care, as he is covered by the Veterans Health Administration. But Mixon is in a different boat.

Mixon said that, once he finds a permanent home, his first goal will be to maintain his health and find insurance.

“My health is not as great as it used to be, so that’s my main focus,” he said.

Right now, he lives on an abandoned property in Richmond. He said he does not go into the house to avoid getting charged with anything, and lives in a garage instead.

The neighbors know he’s there, he said, and he is careful not to disturb anyone.

He said he previously has reached out to organizations for help without much success. But that was not the case Tuesday.

He said he was hopeful.

“It actually looks like I’m going to be getting something done,” he said.